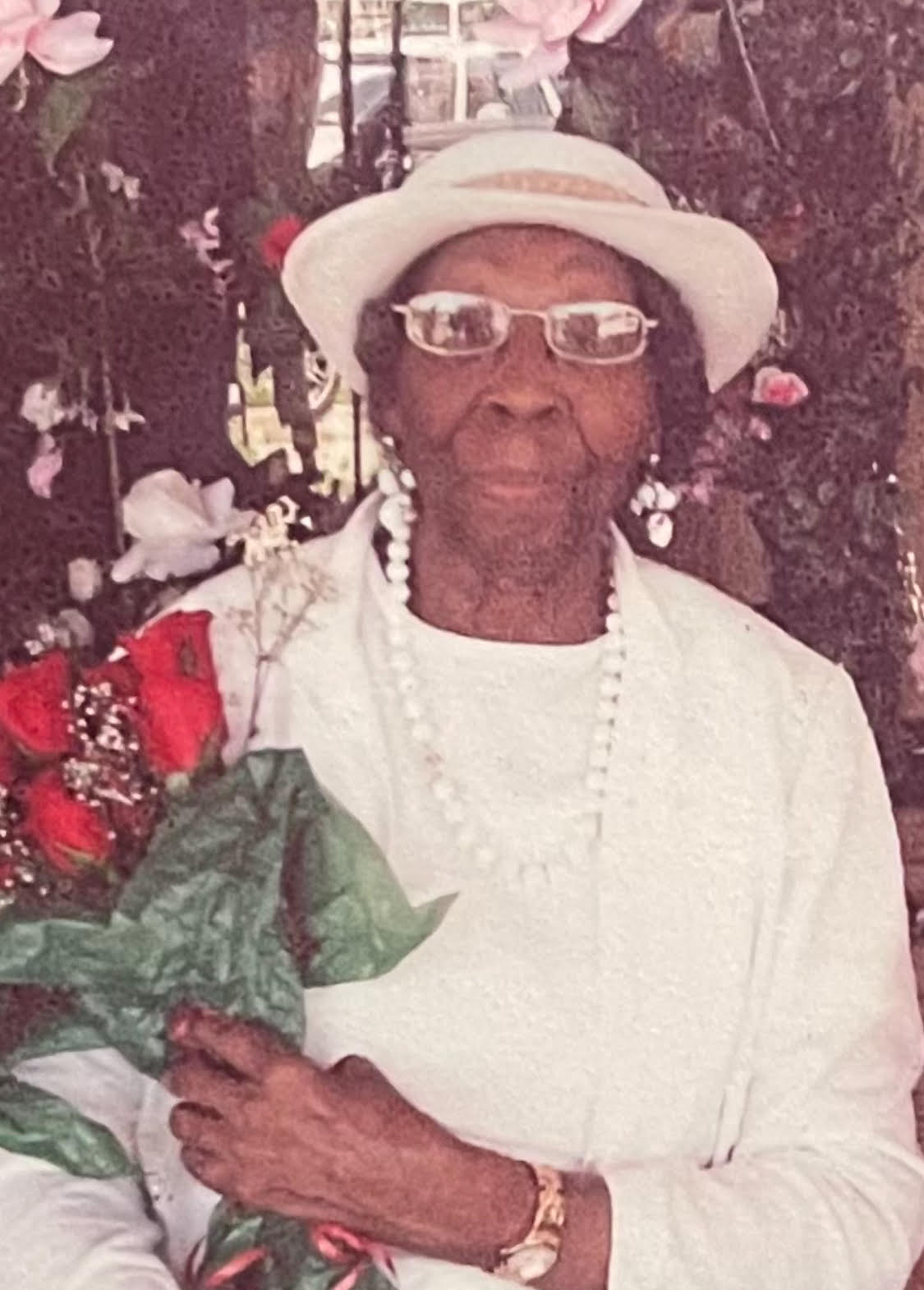 Sunrise: September 13, 1917
Sunset: February 14, 2021
“May The Work I’ve Done Speak For Me.”
On Thursday September 13, 1917, Fannie Alston O’Conner, a “Gentle Spirit”,  drew her first breath of life on this earth in Halifax County N.C. in the city of Littleton, and peacefully expelled her last breath, “103 years” later, on Saturday February 13, 2021, in the city of Chesapeake, VA.
Fannie was the daughter of the late LouCrecy & Felix Alston.  Others who preceded her in death were her three sisters, Margaret, Anna & Estelle Alston Carter.  Three brothers, Sterling, Brack & Robert Alston. Her only son, Brack O’Connor, her husband Samuel O’Connor, one neice-Mary Alice Carter Hawkins, and two nephews, George Alston and Robert Alston Jr.
She was a mild mannered child-who loved and adored and honored her parents (which could possibly account for  her long life). They loved and adored her as well. She attended the local public school in Littleton, and found employment there, until her move to Norfolk, VA, in 1939.
In Norfolk, she established herself and found employment at Sentara Norfolk General Hospital, as a “Short Order Cook”.  Because of her extraordinary culinary skills, and because of the great pride that she took in her work,  it wasn’t very long before she was  promoted to “CHEF”- in short order!   After over 30 years of dedicated service, she retired with numerous awards and accolades!
She  also met her husband – the late Samuel O’Connor,  while working at Norfolk General. She remained true to their marriage vows until he transitioned in 1975. One son was born to the union-Brack O’Connor -who transitioned while he was an infant. She never remarried.
She joined the Historic  “ANTIOCH  MISSIONARY BAPTIST CHURCH, in  Berkley-and remained a faithful member until her health began to decline.
She lived in Calvert Square – where she was well loved & known as the “Candy Lady”. When the city decided to build a new post office, they were forced to move, and she relocated  to Hunter’s Square Apts. -where she joyfully resided for over 25 years!
Those remaining to reflect upon the treasured memories of her long and fruitful life are  nieces, Celestine Alston James (Raymond), of VA Beach,VA,  Fannie Carter Minggia (Lester), Loretta Carter Bowers, Lucrecia Alston Brown -all of Littleton N.C., and Sharron Carter of Roanoke Rapids N.C.  Nephews- , Charlie Carter Jr. (Nannie Maude) of Norfolk, Va., Alonzo Carter, Curtis Alston of Littleton, N.C. LeRoy Carter of Fort Lindenwood Missouri, and her “Absolute Joy ” Sam Alston (Carolyn) of Chesapeake, VA., and as you can imagine -Many Many Great, & Great Great, nieces, nephews, cousins and a host of friends and acquaintances.
Viewing Saturday, February 20, 2021 12 Noon - 4:00pm Metropolitan Funeral Service 120 West Berkley Avenue Norfolk, VA 23523 Service WATCH SERVICE LIVE ONLINE Sunday, February 21, 2021 11:00am Metropolitan Funeral Service Berkley Chapel Interment Calvary Cemetery 1600 St Julian Ave Norfolk, VA 23504 The family is following the CDC and State of Virginia guidelines for funeral attendance.