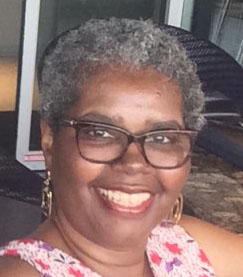 On the evening of September 22, 2021, God, in his infinite wisdom and divine love, called from our midst his faithful daughter, Younde Bynum Hinton.

Younde was born on November 15, 1952, in Portsmouth, VA. She was the daughter of the late Ephriam Bynum and Mamie L. Sherron. She was predeceased by her husband, Donald Hill Hinton, sister, Yvonne Bynum-Scott, and brother, Althaniel (Bumpy) White.

Younde grew up in Mount Hermon and Cavalier Manor. She loved the Lord. Her spiritual journey began as a child at Mount Nebo. As an adult, she was a member of Mount Hermon Baptist Temple, pastored by Dr. Waters, where she was on the youth advisory board, women’s ministry, and a bible school teacher. She continued to grow in Christ as a partner at Mount Lebanon Missionary Baptist Church (The Mount) under Bishop Kim Brown.

She started her educational journey at Mount Hermon Baptist Temple Kindergarten. She continued to matriculate in Portsmouth Public Schools. She attended I.C. Norcom H.S. as a freshman and sophomore (67-69), and was bused to the integrated Woodrow Wilson H.S. during her junior and senior years (69-71). She received the honor of graduating as the class salutatorian (1971).

Younde received an offer of a full scholarship to the then Norfolk Division of the College of William & Mary (ODU). She declined that offer, however, to marry the love of her life, Donald. Shortly after they were married, they left for Germany with their first bundle of joy, Shannold. Another girl and one boy were added to their union, Tiffany and Brian. Younde later earned an associate’s degree in bookkeeping and accounting. She also earned a certification as a telemetry technician. She retired from Sentara Princess Anne Hospital in 2015 as a lead telemetry technician.

Younde loved and raised her three children, making sure that every opportunity was afforded to them. She gave her children the gift of introducing them to Christ at an early age, and she made sure that each of them attended and graduated from college. Younde was intelligent, she possessed a quiet strength, and was a most loving and caring spirit. Younde is best described as a “giver.” She gave of her finances to those in need, gave of her time to causes important to her, offered a listening ear, and offered sound advice. She had a heart of gold.

Affectionately known as “Gran” and “Gi Gi,” Younde was most proud to be a grandmother. Her grandchildren meant the world to her. She made it a priority to spend as much quality time with them as she possibly could. She loved them deeply, and her legacy of love will live on through them.

Younde absolutely loved to travel and shop for hours, she loved gardening and landscaping, she was Ms. HGTV and Do It Yourself; she knew how to fix just about anything, was a daily news watcher, avid reader, and advocate about the importance of voting in local, state, and national elections. What a life she lived!