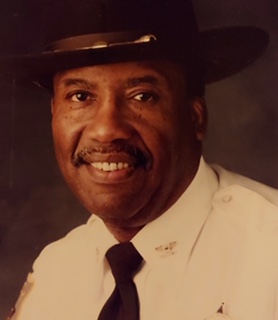 Vernon Lee Gordon, Sr. was born in Norfolk County, VA, on October 29, 1936 to the late Hayward and Rena Sivills Gordon.  He was the fourth of six children.  Having lived a blessed life, filled with love and service to God, family, and humanity, this man of God was called home to be with the Lord.

He attended a one-room schoolhouse in Richard’s Swamp, which is better known as Green Sea. For high school, he attended Norfolk County for the 7th and 8th grades before dropping out to get a job as a hotel elevator operator and bus boy.  After that, he worked at Robinson’s Chemical Factory for several years before beginning as a stock clerk and delivery driver at Earl’s Supermarket.  Always searching for ways to increase his income, he started working part time at the Bank of Chesapeake and Chesapeake Savings & Loan.  Then, in 1962, the doors opened for him at the Chesapeake City Jail where he gained employment as a custodian.  After four years, the always ambitious Vernon saw an opportunity and applied to become the first Black Deputy Sheriff in the history of the City of Chesapeake.  His exemplary performance and work ethic over the years propelled him to the rank of Captain over the city jail.  However, during his rise, he never forgot where he came from as he helped numerous individuals gain employment at the facility.  Vernon was also instrumental in counseling many incarcerated offenders by his example and by his word as he truly wanted to see them get from behind bars, make better lives for themselves and be constructive contributors to society.

He was married to the love of his life, Catherine Whitaker, for 64-years and five children were added to their family.

He obtained his GED in 1975 and later went on to earn his Associates Degree in Police Science from Tidewater Community College.   He was also passionate about his involvement in the community and chaired the Fernwood Farms Civic League.  Another passion of his was softball as he played since the early ‘70’s as a 2nd baseman before coaching the Chesapeake Sheriff’s Dept.’s Softball Team.  And, as many of his family, friends and associates are well aware, he also became very passionate about being out on the links and chasing around after that little white ball in the game of golf.

In 1993, he retired from the Chesapeake City Jail and went on to become the Undersheriff of the City of Norfolk with Sheriff Bob McCabe.  McCabe’ campaign proved successful and Mr. Gordon served as Colonel for two terms with McCabe for a total of five years before completely retiring in 1998.

Now, let’s go on to his work at Jesus’ Church of Deliverance, affectionately known as JCD. Vernon opened up his home to what would become the nucleus of JCD in 1979 by allowing his dearly departed wife, Catherine, to begin worshiping with others in their garage.  Even though he wasn’t involved with the Church at the time, the Lord blessed and it prospered moving to a storefront on State St., and then into a second storefront on Monticello Ave., both in Norfolk.  When the Church eventually moved to a standalone edifice on Shop St. in Chesapeake, he began participating and soon rededicated his life to Christ.  He became so involved that he started teaching Sunday School and very enthusiastically encouraged everyone to participate, thus becoming Sunday School Superintendent in 1984.  In his quest to boost Sunday School attendance, Deacon Gordon’s mantra was always, “If you don’t need Sunday School, then Sunday School needs you!!” In light of his numerous connections gained while employed at the jail, he was instrumental in having building improvements such as new siding installed on the older Shop St. building, paying half the costs himself.  As the Lord continued to bless, the congregation grew, and he along with other board and church members envisioned and yearned for new beginnings; a yearning that would manifest itself in the acquisition of a plot of land and the construction of the building we now have here at 5246 Jones Lane.

Deacon Gordon oversaw the land purchase in 1989 and served as head administrator in the construction of the new building from 1990 to its completion in 1992.   He chaired the building committee, organized fund raisers, and hired every contractor from start to finish.  He was also the “Cheerleader In Chief” as he inspired many of the men in the congregation to grab whatever tools they knew how to handle and actually participate in the construction of the building – – – a phenomenal feat in itself which enabled us to move into our new building DEBT FREE!!

Becoming the Head Trustee and Chairman of the Deacon Board in 2004, Vernon was also instrumental in the land expansion by acquiring the properties on both sides of the church.  And finally, he along with other board members, played a vital role in the construction of the JDC Family Life Center.

Daddy Gordon, as he was so affectionately called by so many, will be sorely missed. He was predeceased by his wife of 64 years, Catherine; daughter, Wanda; brothers, Haywood, Norman, Cleveland, and Moses.  Here to forever cherish his memories are his children Cynthia Benson (Larry), Valerie Wilson (Robert), Sherry Harris (Nelson), Vernon Gordon, Jr., Shawn Hedgepeth (Monica), Andre Grayson (Katherine), sister, Lillie Mae McCoy (Clifton) sister-in-laws, Dorothy and Carolyn Gordon, 16 grandchildren, 12 great grandchildren, and a host of other family members and friends.