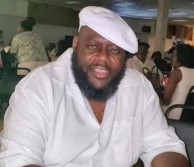 ~The Life Story~
A Time To Be Born
Surjell Brickhouse was born the youngest child to the late Herbert Curprew and Mildred Brickhouse Curprew on April 17, 1967 in Norfolk, Virginia. Surjell was affectionately called “Surj”, “Surjee” and “Brick” by his family and friends.

A Time To Live
Surjell was educated in the Norfolk Public School system and went on to graduate from Granby High School in 1986. He later married the love of his life Rhonda on May 14, 2004. Together they had three children and created a family filled with love. They enjoyed vacationing together with their children and grandchildren. Florida became one of their favorite destinations.

A Time To Serve
Surjell joined the United States Marine Corp. He served four years active-duty from January 19, 1988 – January 19, 1992 with an honorable discharge as a Lance Corporal; followed by and four years in the Reserves beginning May 3, 1995. During this time he received several accommodation: Sea Service Deployment Ribbon with 2 Stars, National Defense Service, Navy Unit Accommodations, Certificate of Appreciation, Coast Guard Certificate Metal of Achievement, South West Asia Service Metal and the completion of Field Operator Course. He later worked for the City of Virginia Beach, in the Department of Public Utilities.

A Time To Die
Surjell spent his final days in at home, later moving to Lee Memorial Hospital surrounded by his loving family and friends. He slipped away to be with the Lord on Sunday, January 9, 2022 at 3:03pm.