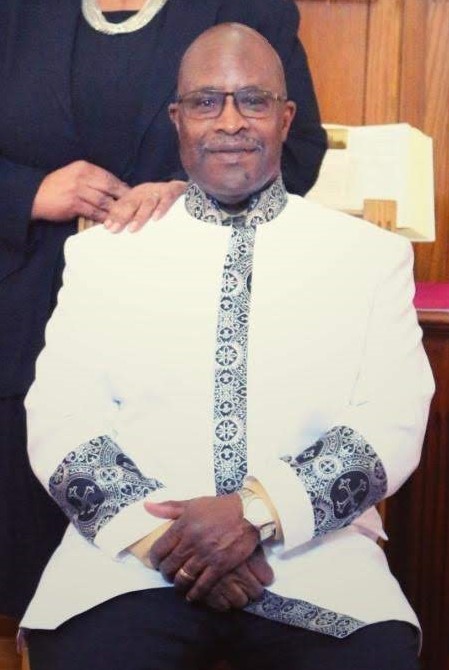 Pastor Stanley L. Eley 61, of Chesapeake, Virginia answered the call from the heavens above. God spoke to him and said, “Your journey on earth has come to end, and your journey in Heaven can now begin.

Stanley Eley was born on December 31, 1959 to Emily and the late Leo Eley and was the 2nd of seven children.

Stanley is predeceased by his son, Michael Nichols.

Stanley attended the Suffolk School System, where he participated in both Track and Field, and Football before graduating from Forest Glen High School, where he was considered to be very athletic and loved by many.

Stanley often worked with his father during his teen years before he went to work for Smithfield Gwaltney, where he gave his life to Christ on the floor in the spice room. After many years of working at Smithfield Gwaltney, Stanley began his journey at the Newport News Shipyard, where he received many awards including the Model of Excellence award, for his faithful service and his ability to work with others.

“The Call to Ministry”

Stanley’s journey to serve the Lord began when he became the Sunday School Teacher and serve on the Usher Board while he was a member of Centennial Baptist Church for many years. Stanley later found himself serving the Lord at New Berean Baptist Church, when he was called into the Ministry, and was ordained under the leadership of the late Pastor Leroy Ricks, Sr. while attending Bible College at Calvary Baptist Church (located on Gust Lane in Portsmouth, Virginia), in order to further his studies in the word of God. He was called by God to serve as the Pastor of Macedonia Baptist Church, where he served faithfully for almost 10 years. Pastor Eley had two different expressions that he would always say, “I’m not talking about you, I’m talking about me too” and our favorite as well as his, “I love you and there’s nothing you can do about it.” While he laid resting near the end of his journey, he continued to deliver the word of God to the nurses at Maryview Medical Center. He’s truly going to be missed by all who knew him.