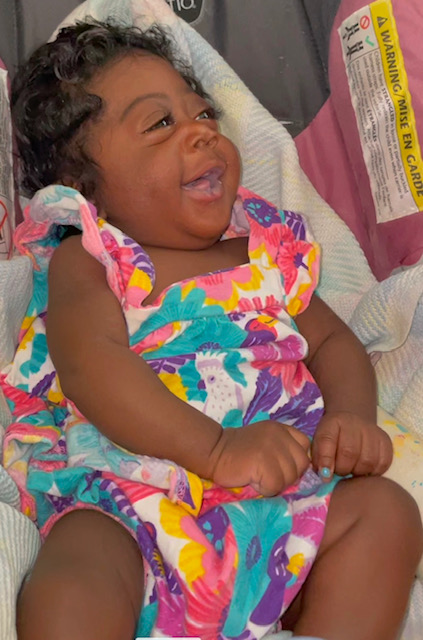 Reign Marie, so beautiful Precious and Beloved,  came to be known to all as “Reignbow” a nickname given to her by her Grandma Charvay.

Despite a premature birth and bout in the NICU, Reign triumphed. Though she faced some health challenges, she overcame them one by one. She shocked the medical staff as she advocated for herself with mommy’s full support. Always determined, she quickly progressed until she was released from the hospital. She was on a personal mission to be free of all medical equipment and she took it out herself time and time again until she was able to maintain on her own. When she was not pleased with the service she received being her feisty self, she made sure everyone knew it. Reign taught all who came in contact with her the real meaning of strength. In spite of her vigilant fight, when she breathed there was a whistle that gave way to a snorkel that we came to love to hear.

Her determination confirmed to her family that she belonged at home and she filled our house and lives with an abundance of love and joy. Each day was a gift to us, and meant so much.  Her bright eyes and big smiles showed us she felt the same. We made plenty of memories with Reign. She traveled near and far, went to restaurants, made tik toks, painted nails with her sister, swam and even got in a fight or two with her brother, Kuentin.

Reign Marie is so very loved and cherished and will be dearly missed by all who knew her. Her family will never be the same and we are grateful for the example she set before us. Despite what’s going on she taught us to approach each day with a smile on our faces. We are confident that she is now free and flying with the  angels that went before her. She will forever “Reign” in our hearts.

She is survived by her parents Raymond & Renisha, her sister Kamiryn, her brothers Raymon, Kaiden, Karter and Kuentin, both sets of grandparents Charvay & Dexter Wright, Gary Spady, Karen Fauntleroy & Baron Moore, many aunts and uncles and a host of other relatives.  Her heavenly babysitters are her older cousin, Janeria; Great Aunt Cheriea, Great Uncle Buck, her Great Grandparents Lizzie Lee Ricks and Luke Edward Jackson and her Great Great Grands Joe & Merlene Lomax.