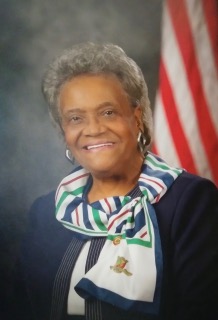 Marlene West Randall, the daughter of the late James E. West and Gladys West Pretlow, was born on October 18, 1934 and raised in South Norfolk.  On Thursday, April 1, 2021, she peacefully made her transition to be with the Lord.  She was an active member of New Bethel Baptist Church in Portsmouth, Virginia as well as her community.

Having served in many endeavors, Marlene served as Treasurer of Church and Community in Action; Secretary Area II NAACP (Norfolk, Portsmouth, Chesapeake, and Suffolk), Vice Chair Norfolk/Portsmouth Empowerment 2010 Governance Board, Political Actions Chair NAACP (Portsmouth Chapter), “motivator” to everyone in the G.E.D. program at the Queen Street Center and served on the Portsmouth City Council (2002-2014). As a Councilwoman, she served on the Virginia Municipal League’s Educational Policy Committee and was historically named the first African-American female Vice Mayor during her tenure.  One of her passions was serving as one of the active leaders of the renowned Umoja Festival, a premier African-American cultural celebration in Hampton Roads.