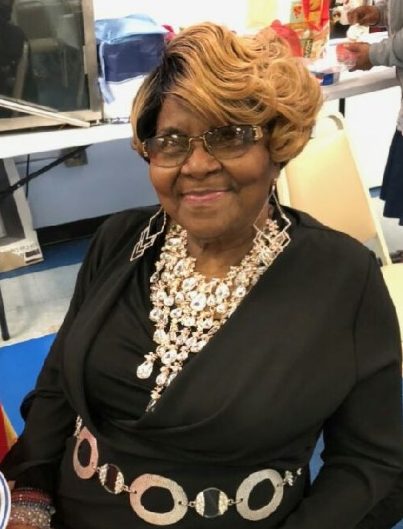 Kathleen Saunders Perry was born in Rocky Mount, North Carolina on March 18, 1932 to the late Elizabeth Saunders. She transitioned from mortal to immortality on Saturday night March 20, 2021 surrounded by her daughters. It was a beautiful sight, to see her rise from labor to reward.

Kathleen, grew up in Robinsonville, North carolina and graduated from high school in Rocky Mount. Kathleen worked for many years at Meadows Private School in Norfolk as the cook and housekeeper. The staff and children loved her. She was known for her kind heart and good cooking. Kathleen married and had a total of nine children. They were all spoiled because she taught them that you can get anything you want in life, if you are willing to work hard for it. She also taught them to be good people, to share their blessing with others and to love the Lord, which she did by example. She was always there for her children in health and illness. When each of her children had medical needs or assistance recuperating after surgery, she would pack her bag and move in with them showing tender loving care and affection while nursing them back to health. Thus she was nicknamed “Nurse Betty.”

Kathleen was a woman of strong faith. She’d lean on God to help her raise her 9 children. She would often pray over them asking God to guide and protect them. Though there were times her family did not have much, she would share what she had with others.

Kathleen was a member of the United House of Prayer for All People for over 60 years. Soon after attending with her husband she joined and it was apparent that she was talented, creative and a very good speaker. She began to MC for large programs and gatherings. She was then known as Sister Perry, and sang on various groups and choirs. One was an acapella group that travelled as far west as Los Angeles, California, as far south as Miami, Florida and as far north as Buffalo, New York.  What beautiful melodies they sang on the musical programs. She also worked as youth president and worked diligently to inspire and motivate them. She would decorate for holidays and work to help create various plays and pageants for the young people. She worked hard for the upkeep of the faith. Kathleen Perry was very spiritual and believed in the power of the Holy Ghost and the teaching of House of Prayer leaders.  She was then known as St. Kathleen Perry. She would sacrifice often, the little that she had because she knew that God would Bless her twofold.

For almost 30 years she lived in Stonebridge Manor apartments where she was very active. Often cooking weekly breakfast for the residents, and helping to plan and prepare special dinners for Thanksgiving and/or Christmas. She and others would also seasonally decorate the community center for all to enjoy.

Kathleen will be truly missed will be vast. She was predeceased by her brother Robert Saunders, her sister Mary Taylor and a son Ronnie Saunders. She leaves to cherish precious memories of her time with us, four sons, Leonard Perry, of Chesapeake; Julius Perry Jr. (Robin) of Jacksonville, Fl. Walter Perry of Lancaster, Pa. and Marvin Perry of Norfolk. Four daughters, Vernetta Howell, Judith Yates (Joseph), Missionary Camellia Tomlin, and Ramona Boyd all of Norfolk. One cousin Irma McPherson (John),  14 grandchildren, 17 great grand children and 5 great great-grand children, as well as a host of nieces, nephews, church family and friends.