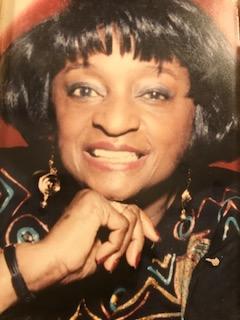 Jean Lee Howard departed this life onJuly 29, 2019. She was the daughter of the late Robert and Elena Howard of Norfolk, VA.
She was preceded in death by thee sisters, Edna Carr, Algerine Fairfax and Cleona Johnson; one brother, Leon Howard all of
Norfolk, VA. Jean was born October 2, 1935 in Norfolk, where she received her early Christian education, attended public school, graduated from high school, attended night school and in 1959 travel to New York City to join other family members.
She worked at Metropolitan Life Insurance Company’s in New York City as well as their San Francisco Pacific Coast office as an Insurance Clerk. After returning to New York city and receiving a Grant from Columbia University where she studied and worked as an Inhalation Therapist at Harlem Hospital.

In 1967 Jean began working for New York Telephone Company now known as VERIZON as a Customer Service  Representative and retired in 1990 and remained and active member of The Telephone Company Pioneers of America and the Communication Workers of America Retied Members Association. After retirement she worked at George Washington High School and McGraw Hill Book Publishing as a temporary employee until 2003.

She was proactive member of the church on the HILL A.M. E. Zion for many years and continued her Christian Journey to Antioch Baptist Church, where she was a member of the Missionaries, Gospel Choir and the Bust Bee Ministry. Jean loved
music and people and throughout the years invited friends in for her Delicious Meals.

Jean leaves to cherish her memory one sister, Lillian Stuart of Norfolk, VA and a host of nieces, nephews and other relatives and friends.

We Loved JEAN, But God loved her BEST.