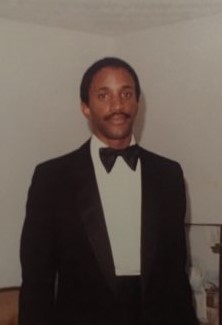 Eric Lee Joynes was born to the late Abrom Bernard, Sr. and Augustine Jenkins Joynes on April 23, 1957 in Norfolk, Virginia. He was the youngest of five children and spent many spring and summer nights in the emergency room getting treatments for wheezing. He would always return home breathing normally and everyone was so happy for that. To stay healthy and avoid another asthmas episode, he had to avoid all yard work, most house chores and hence, “the spoiled one”.

Eric grew up and was educated in Norfolk Public Schools. After graduating from Norview High School, he earned a bachelor’s degree in Fine Arts from Norfolk State University. After several jobs, Eric was hired by Raytheon where he worked in the shipping department for more than twenty-eight years. Eric loved his job and was sadden by the company’s decision in 2016 to relocate out of the state of Virginia. It was at Raytheon where he established many lasting relationships with some wonderful people. He would often share heartwarming stories of his coworkers with his family. Eric loved being around people and he enjoyed making others laugh. That was his gift. At every family gathering Eric was the cousin or the uncle that everyone looked forward to seeing because they knew that he would make them laugh.

Eric was always an artist; he impressed everyone with his gift to draw life like sketches and his ability to create beautiful artwork out of anything. In 1993, he was featured in a local news article that described his part-time business, “Mutz Foam Rubber Sculptures”. For several years he displayed his foam rubber animal creations at various art exhibits and at a local crafter’s mall.

He was a natural born caregiver. When he was a child, he wanted to take care of any kind of animal that he thought needed his care. He talked his parents into adopting a variety of pets – a turtle, rabbits, ducks, guinea pigs, hamsters, a ferret, many dogs, and birds. More importantly, Eric knew how to care for people. In their later years, both parents needed a caregiver and Eric became the loving caregiver for his father and his mother.

Eric loved the Lord. He accepted Christ and joined Holy Temple Church when he was a child. He attended regularly until his caregiving responsibilities prevented regular attendance. In recent years, his love for God was expressed in his tender way of caring for other people, especially those who were facing difficult times. He loved to call someone to let them know that he was there for them and he would always remind them that God loved them and all they had to do was to “trust God”.