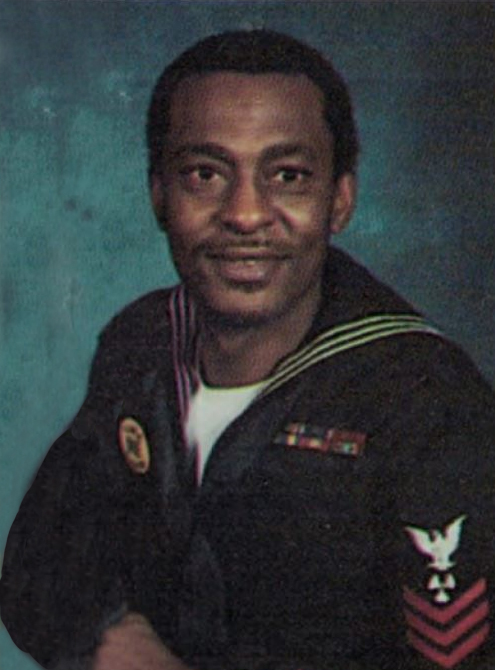 Mr. Lindsay was a member of Ebenezer Baptist Church in Virginia Beach. Edward received formal education from Princess Anne County Training School and Norfolk City Public Schools. He served in the United States Navy, attaining the rank of Machinist’s Mate Chief (MMC). Over the course of his military career, Edward served his country in a variety of settings, beginning with Navy aircraft carriers and transitioning to classroom instruction. He served on the USS Robert L. Wilson (DD 847), USS Dalghren (DLG 12), USS Eugene A. Greene (DD 711), USS Pensacola (LSD 38), USS Independence (CV 62), USS L. Y. Spear (AS 36), and USS Dwight D. Eisenhower (CVN 69). Additionally, he was an instructor at the Naval School of Cryogenics in Portsmouth, Virginia and the Fleet Training Center in Norfolk, Virginia. He was proud to serve his country, as was evident throughout his daily work routine. In his letter of appreciation, his commanding officers described Mr. Lindsay’s performance as “outstanding.”

Upon his retirement from service in 1988, the Department of the Navy wrote in his Letter of Appreciation, “MMC Lindsay took exceptional pride in the image he projected and demanded similar high standards of subordinates. His astute management of personnel and equipment assets and close attention to the material condition and preventive maintenance … working conditions, and physical appearance of Cryogenics School. He consistently exhibited those traits highly desirable in a Chief Petty Officer, including strong leadership and managerial abilities, tact and compassion, and an innovative and intelligent view of the future.”

Building on the experience he gained in service to his country, on July 10, 1989, Mr. Edward Lindsay started working for the Norfolk Naval Shipyard (NNSY) as a Marine Machinist Mechanic in the Diesel Shop, where he worked for thirty‐one years. He was predeceased by his parents and his eldest sister, Mrs. Hortense E. Lindsay Watson. Edward leaves to cherish his memory: his wife of fifty years Barbara A. Lindsay of Virginia Beach, Virginia; his two daughters, Dr. Sebrina A. Lindsay‐Law (Richard) and Ms. Rhonda A. Lindsay, both of Virginia Beach, Virginia; his two grandsons, Mr. Josiah A. Law and Mr.
Isaiah J. Smith; his siblings, George A. Lindsay, Jr. of Phoenix, Arizona, Walter L. Lindsay, Sr. of Norfolk, Virginia, Harriet A. Gordon of Norfolk, Virginia, Christine A. Lee of Richmond, Virginia, Dr. Margaret L. Morris (Richard) of Orangeburg, South Carolina, Jerome Lindsay of Burke, Virginia, Dr. Michael K. Lindsay (Lorna) of Lithonia, Georgia; and a host of nieces, nephews, relatives, loved ones, and friends.

Mr. Lindsay provided an example of excellence and pride for so many through his dedicated, dependable, and wise spirit. He was a quiet strength. He valued structure, he observed rules and he believed in decorum. These qualities made Edward a natural peacemaker. He had a way of calming a tense situation with ease. Edward also loved sports. He was known to be a quiet man, but on any given Sunday, you could catch him wildly cheering on his favorite NFL team, the Washington Football Team. He was a huge Norfolk State University Spartans fan and would often attend games. He was well studied and could talk about a wide range of subjects from the Bible to politics and race relations.

Edward loved spending time in nature and particularly found peace during his early morning fishing trips to his favorite pier, the Lynnhaven Fishing Pier in Virginia Beach. He also enjoyed taking his daughters to pick fruit in nearby strawberries fields. He instilled in his beloved daughters a love of family, discipline, togetherness, music, and laughter.

Edward’s presence we will miss, his memory we will treasure, loving him always, forgetting him never.