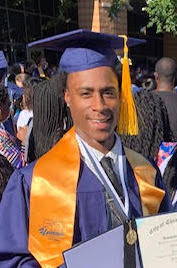 Dominque “Dom” Brooks was unfortunately taken away from us on Friday, October 1, 2021. He was born, along with his twin brother, on December 8, 2000 in Norfolk, VA. He graduated with academic honors from Indian River High School in 2019 and attended Norfolk State University where he studied Business Management.

“Dom” would light the room up with his smile and vibrant personality. His warm loving heart touched everyone he met. He left an impression no matter where he went even if you knew him for years or just one day.

Dominque “Dom” was a stellar athlete that played football and basketball at Western Branch High School. He went on to play quarterback at Oscar Smith and Indian River High Schools. He led Oscar Smith to the 2018 State Championship playoffs. At Indian River he led them to the Regional playoffs where he made history. In 2018 he was named 1st Team Quarterback and Offensive Player of the Year for the Southeastern District. He was awarded an athletic scholarship from Norfolk State University.

He left to cherish his memory: his mother, Lakisha Pile; his twin brother, Dontae, and brothers Deveon and Demetri; grandparents, Gail and Jose Lewis; aunts, Kimberly and Courtney Brooks; great-aunts, Lorraine Vango, Alice Allen, Barbara Allen Frazier (Romeo) and Joyce Johnson; and a host of other relatives, cousins and friends who loved and cared for him dearly.