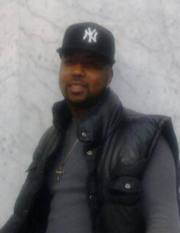 A dedicated family man, hard worker, great achiever, humorous and extraordinary entrepreneur was called home by our Heavenly Father on May 06, 2019. Dawson D. Andrews, III was born November 18, 1971 in New York, NY. He was educated in New York and Norfolk Public Schools. He recently began a career with Virginia Supportive Housing Authority in September 2016 until he departed. Dawson loved the Lord and accepted Christ as his personal Savior at an early age. As he put God first, he was most thankful for his daughter Manarie. His smile grew bigger and brighter at the site and thought of her. She was his greatest accomplishment. Dawson was a fan of all things New York. He loved the New York Giants most of all but was also a fan of the New York Knicks and the New York Yankees. He was a fan of hip hop music and loved to wear fitted caps. You never saw him without one. Dawson’s greatest asset was his smile. He had a smile that would  brighten any room that he entered. His memory will forever be etched in our hearts and minds.

He was predeceased by his Father Dawson Andrews, II and his Mother Yvonne B. Faulk.
He leaves to cherish his memory his beloved daughter, Manarie Andrews of Norfolk, one brother Shawn Scott of Philadelphia, two sisters Tamara Faulk (Savoy Odom) of Norfolk and LaQune Corprew of Virginia Beach. Five nieces, one nephew, one Goddaughter Skylar Odom, three Aunts (Geraldine, Cynthia, and Teresa) and a host of cousins and friends.