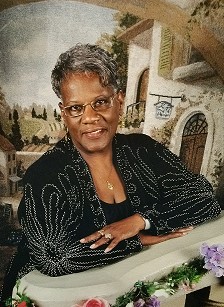 Hours before celebrating her birthday and beginning the New Year, Sis. Burnette C. Pepper slipped quietly away and took her flight into eternal life, on December 31, 2020, On January 1, 1945 in Newburn, NC, the Lord blessed the union of the late Frederick A. Carter, Sr. and Eloise M. Carter with the birth of their second child Burnette Deloris; she was known and call by her many family and friends, “Bea”. Bea was the second oldest of five siblings.  She was educated in the Norfolk Public School System where she attended Jacox Jr. High School and B. T. Washington High School.

She met and married her sweetheart, DK-1 U S Navy, Frank Carl Pepper on November 25, 1966.  Her marriage to Carl allowed her to travel to many different countries. Her favorite port was Germany, which she traveled too eight times.  She was employed for over 20 years at Tidewater Air Filters in Virginia Beach VA; and worked briefly at the Gourmet Coffee Warehouse on 21st Street in Norfolk, VA.

As a Navy spouse, she was committed to helping military veterans.  She joined the Women’s Auxiliary of the American Legend Post Unit 60. She and long time friend Bertha Underdue-Turner wanted to re-organize the Unit after the passing of several members.  Taking an interest in their desire to grow and make the female Unit more active, in 2002 Commander Herbert Ford paid the dues for Bea and Bertha to re-start and expand Unit 60.  Once the membership increased the Unit held their first election of officers; Bea was voted into the position of Sergeant at Arms. She held the position until her passing. Unit 60 pride themselves on helping military veterans through the sponsorship of various events, most notably their Annual Thanksgiving Dinner, celebrating military accomplishments on Veterans Day, Christmas and various outings which gained Local and National attention and recognition.  Bea always looked forward to their annual conventions held in various states.  She was part owner with her Brother Lil Fred then became owner of the Roaring 20’s Night and Supper Club in Norfolk. Bea enjoyed taking cruises with her girl friend Frances Boyd and she looked forward to their weekend bus excursions.  Her favorite past time was playing Bingo.

Bea had a strong love and commitment to family. She always enjoyed family gathers, especially family holiday dinners at her home, or Mary’s; and Family Reunions Picnics. She loved attending the many activities her children and grandchildren were a part of.

She joined the United House of Prayer For All People Norfolk #1 under the deceased Pastor, Apostle T. Simpson during the dispensation of our deceased Leader Sweet Daddy McCollough. She loved the singing of the various choirs and the music of the shout bands.  Her favorite song was, “His Eye Is On the Sparrow”. During one of the Sunday morning services, the spirit was so high Bea got caught up in the shout. When she came to herself, she told her sister Mary, “I never felt anything like that before”.  She loved hearing the word of God delivered in sermon by her Pastor, Apostle W. R. Scott, Sr. She helped her sister Mary with many programs sponsored by the Maids Auxiliary, and she helped in the cafeteria.